Recover the passwords of iTunes backup files by running a brute-force attack in a few simple steps, with this intuitive application 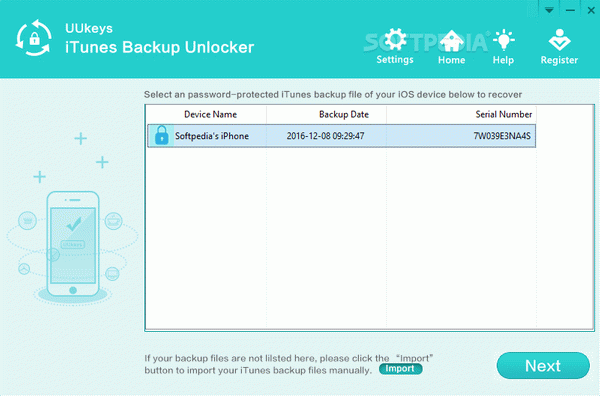 When saving important data from your iOS device locally, iTunes offers you the option of encrypting the backup file with a password. While this is a great security feature, you may end up losing access to valuable data should you forget your passkey.

UUkeys iTunes Backup Unlocker is a handy software solution that can help you out in this unfortunate scenario. It is capable of finding your lost password by trying out a large number of combinations until the right one is discovered.

After installing and launching the application, you need to specify which backup file should be processed. The program can locate any available backups automatically, but you can also import the files manually.

A standard brute-force attack can be run without performing any configurations, which is great news for less experienced users. Little documentation is provided, but the application’s functions are fairly self-explanatory.

UUkeys iTunes Backup Unlocker can attempt to retrieve your password by running a simple brute-force attack, which involves trying out as many character combinations as possible until the correct one is found.

You also have the option of defining the minimum and maximum length of the password, specifying which characters sets should be used and setting a prefix or suffix.

However, the program cannot perform a dictionary attack, which would have been much more suitable for retrieving passwords that consist of common words.

As far as visuals go, UUkeys iTunes Backup Unlocker is fairly unassuming, and the interface seems a bit unpolished at first glance. Nevertheless, first-time users are certain to appreciate its simple, wizard-style layout.

Overall, this is a lightweight and easy-to-use application that can help you recover the passwords used to encrypt iTunes backup files. It would benefit from an additional retrieval mode and a polished UI, but it is well suited for novices.