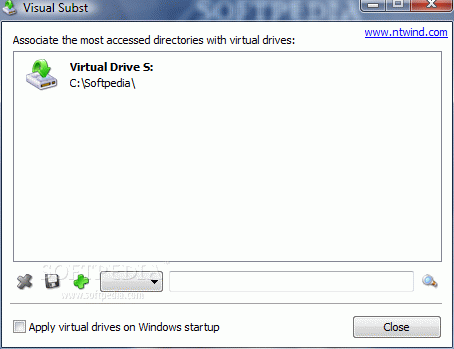 Major sections of storage devices and drives have their own letter assigned so no issues are encountered during read and write operations. As such, Visual Subst comes as a tool with which to save any folder of choice as a virtual drive which can then be dismounted so only you have access to its content.

In terms of visuals, the application keeps things simple, and doesn’t keep you busy a lot of time with accommodation. A list displays all folders you add as virtual drives, with a slim toolbar which is equipped with all buttons and functions you need to add new drives to the list, or manage existing ones.

Dropping a folder over the main window has no effect, so you need to rely on the built-in browse dialog to select a folder of interest. Only one item can be added at a time. Once it’s loaded, you can then assign a drive letter from the drop-down menu, but be sure not to use one which is already assigned so you don’t run into any issues.

It’s enough to add a folder to the list and it immediately appears in the general drives Explorer window. It can be accessed just like any other drive, opening up with the content of the target folder. However, all files inside are read-only, which might cause some problems when trying to add or remove files or folders stored there.

Once the application is closed, all drives are dismounted. On the bright side, there’s a built-in option which can be used to load all virtual drives on startup so that they’re ready by the time you reach the desktop.

Taking everything into consideration, we can state that Visual Subst is a practical application to create shortcuts for frequently used folders to have them at hand when transferring files and folders between fixed and removable storage devices.

thanks for Visual Subst serial